Paying Protection Money to Your Computer 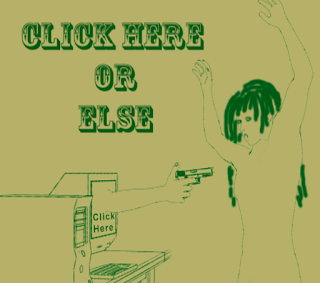 I was in a phone conversation with a Phoenix reggae legend. Being a reggae keyboard player in the evenings while also being a project manager at Intel Corp. for 23 years had already led me into many interesting clashes of technology vs. user philosophy, but this sounded like a very unusual computer problem indeed. The famous “DDred,” who is the real deal straight from sunny Jamaica at large in the valley, was telling me that his computer, a tool which had been coined by Andy Grove (former CEO of Intel), as a “swiss-army knife of devices” had failed to the extent that it could only accomplish one single task.

“What do you mean “it only does one thing”?

He didn’t lie. His computer had been attacked by malware in the guise of a “virus fighting program,” as I’ve seen on so many different Windows machines before. But what I’d never seen before was that instead of the malware just making windows which annoyingly “pop over” everything as is most often the case, this uppity malware had taken complete control of his machine and even changed his desktop to a giant banner for the pirate company software urging you to click the big link in the middle of the page to pay your money for the magic key software that would presumably give you your computer back.

There has to be something better for people who don’t care to fuss with the computers in their lives. People like my mother, who gave up her new laptop for an old Windows 2000 machine, only because the new laptop pestered her about how many “phishing expeditions were attacking her firewall,” and how some guy named “Norton” had been pushing my dear sweet mom for protection money for "virus-protection over the upcoming computing year." Not everyone wants to have to learn how to be a “system admin” to keep the computers running for their families or businesses.

Like a well-aged wine, I see Ubuntu Linux as ready and in prime position to snatch the lion’s share of of the market in family and educational usage away from the “Windoze” juggernaught. Why?

Well, for a few reasons:
1) In the past 10 years, a huge multi-national community of Linux devotees have taken Ubuntu Linux from a highly-secure, powerful, elegant text-based “for nerds” operating system to a user-friendly realization or the Ubuntu model: “Computing for Humans.” The latest version makes most any P4-level PC or Intel-based-Mac feel like it has more under the hood than it actually does, while the smooth animations and transparencies of the Ubuntu interface itself makes the user feel they are running a well configured Win7P installation.
2) Each Ubuntu install comes with a “better-than-Full-Blown-Expensive-Office” installation of “Open Office.” This means anyone with Ubuntu Linux is “set to go” editing and creating not only Word, Excel or Powerpoint files, but also Word Perfect, Lotus and .pdf. Office 2017 anyone? Bueller...? …anyone? Plus, you can easily connect your Linux system to almost any printer or scanner without having to find updated drivers.

3) The virus thing. Let me put it this way: “Linux systems don’t really get viruses “ (or virii for the latin-based). That’s not to say that there won’t be viruses written for Linux someday (most likely when everyone is using it). But for now, very few self-loathing hackers would waste a second of their precious anti-social-behavior-time writing a virus to attack only their fellow Linux users (a very small pond to fish in when there are plenty of suckers in the Win-pond). Yes, you heard right! The hackers' more productive and sane classmates who are learning how to write programs for computers are using Linux themselves because now, in addition to being very easy to learn and use, Linux lets programmers do the things that they need to do, like read and operate in several different operating systems (at the same time even) and have access to 1000’s of sophisticated “open source” web design and network management programs. In any case, even when the virii come, the elegant simplicity of Linux will always make it much easier to keep secure against the baddies.

Those are pretty good reasons, but believe it or not, there are many, many more (did I mention it is free?). There you have it: This is Pablo’s blog and here I will be getting excited over the following (but not limited to) items:

1) Laptops. What are the real “vintage” laptops and which were some of the worst in history? If you look at some of the models coming out lately, we seem to be rushing toward the “disposable” laptop. Is that a good thing? What about using older laptops to take on various single-issue roles around the house (for example, music library computer etc etc, computer with downloaded movies etc)? Linux makes that very easy to do, by the way.
2) USB Gadgets I love the potential here! Think of it: your laptop USB port can both power and control…something/anything! I will be reviewing the wackiest of these new gadgets I’ve been able to find out there on my upcoming video podcast: "The HippyDippyTrippyGadget Hour," where we will review a “USB Presidential Lie Detector Test.” On the podcast we will also be interviewing local Phoenix Artists and “Weird Business Owners.” That is to say that the businesses will be weird, not the owners, but in some cases…hmmm. Check your local listings.
3) Local Music from The Valley of the Sun – As a local musician myself, I can’t resist this one.
4) …and of course: Linux. (but you knew that already) :)