A Daily Show story that you must not miss! Republicans pull off a PR coup by semantics: "repeal of "Job-Killing" Health Care Bill." Thankfully, in light of the recent tragedy, they are willing to negotiate renaming the bill to "job-destroying." As Stewart says, "job-killing, in the sense that getting more sleep is "awake-killing."

*** BONUS *** Watch the Fox News Anchor attempt to shape the message by cutting off their whiny "Liberal" flack even after he promises him "the last word".

Do people really go for this crap??? Is this thing on?

On Palin, Glenn Beck and being "Socialistic" 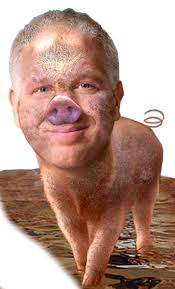 "..you actually feel America would be better off if we were socialistic?"

I'm sure this isn't a surprise to most of you, but America has many facets of "Socialism" woven into the national thread already. Examples include: 1) Police Force 2) Fire-fighters 3) State and Interstate Highways etc etc...So ANY country which has ANY of those things has "Socialism" in the govt. already. Like trying to take away people's guns, the "Anti-Socialists" are going to start getting a lot of crap if they try to start actually taking away our roads, our bridges and letting our houses blaze away.

I understand this guy doesn't want the extreme idea of Socialism, but I doubt he wants to live in Nairobi (the other extreme) either...The least amount of govt. can be found in the poorest countries on earth. Jefferson said that the government "which governs least, governs best," but he also set up the education system for this country and felt that education of the common man was paramount to "nurturing this democracy." So why do typical folks who decry "Socialism" with nearly every breath want to begin chopping away at our already-underfunded educational systems as a typical first choice? I thought they were getting all "founding fathers" on our collective asses.

Palin is done. Her numbers tanked after her last speech "I'm the victim" disaster. Even her big PR-fest planned with Sean Hannity isn't going to help her now. Beck is still dangerous, because some people actually believe he is teaching them something. He points the finger at "liberals" for everything wrong in the world like Hitler pointed at the Jews.


On the tenants of being "Socialistic," I forgot to mention libraries and post offices, which were invented by Ben Franklin for crying out loud...

On not ever meeting Timothy Leary...

10:32 PM |
I would have loved to have met Timothy Leary.  I read a lot of his books when I was in a very counter-culture phase of my life. People say that folks my age are "boomers," but I believe that we are on the cusp at most if not at the beginning of generation X. We missed out on the hippie years watching cartoon hippies on Saturday mornings.

I have a friend that played in a popular band that saw Leary at a big LA party. He said the crowd there was too young there to recognize Leary. So Leary, not talking to anyone, decided to amuse himself by doing something on a calculator. The calculator was solar-powered, and kept failing due to low lights at the party. So he eventually managed to keep the calculator going by lighting matches, one after another, laughing the whole time.

6:17 PM |
I was fooled by a photo-shopped voter registration record of Jason Loughner someone had posted a couple of days ago, showing he had registered as "Republican".
When I mentioned to someone in a FB thread that I thought Loughner was registered as a Republican, I got a reply on the thread that the screenshot was fake and this person figured I knew it but was "spreading lies anyway" and that I was a "worthless POS" for doing so, and then this individual FB "blocked" me.

I live in AZ and Giffords is one of my best friend's reps in Tucson. I admit I was overcome by sadness and then anger for the violent language that we are subjected to from certain News media. I even figured Laughner must be a Glenn Beck fan, due to some peculiarities within his artifacts. Later, I learned that there is a bona-fide hate group called "Sovereign Citizens" that matches many of his ideas more closely.

During this time I remembered that I, myself have called our current governor "murderous" because she would rather build new baseball stadiums than provide promised-organs to those needing transplants in our state.

Now, I just am thankful that Roger Ailes of Fox has asked his broadcasters to "tone it down" so as not too provide any fodder for those currently doing web searches for "vitriolic rhetoric," and for the first time ever, I've witnessed Rush on the defensive. I am taking a vow to never again refer to our governor as "murderous." It doesn't really help push the issue in the right direction, in my opinion.

8:34 PM |
It's hard not to say something about the brutal shooting of Congresswoman Gabrielle Giffords. I agree with Sheriff Dupnik: This is a time for reflection on who we are as a nation. We've never been so polarized. I believe the "the vitriolic rhetoric" Dupnik was referring to in his statement was aimed squarely at the likes of Fox News, especially Glen Beck, Rush Limbaugh and Sean Hannity.

Someday, people will begin to realize that it may be OK for someone to wail for hours "Obama and the Socialists are tearing down our country...why won't someone stop these terrorists in our government??...liberals and gays are raping our country, why doesn't anyone stop them?" as long as the viewing audience is not mentally disturbed, but when this crap is viewed by someone who is mentally disturbed, then the outcome is tragic.

Think I'm off-base? The shooting suspect had these traits: a) had an obsession with the letter of the Constitution; b) spoke of "current treasonous laws"; c) spoke of "currency not backed by gold"; d) mentioned "illegal illiterate pigs"; e) had a sense of paranoia toward the government.