10:53 PM |
It seems the great Obama experiment has come to an end.
The people I've spoken with seem to agree that Obama was himself voted in by anger at Bush, so why not a "grass-roots" campaign of anger?. I disagree Obama was voted in thanks to anger at Bush.

He was voted in first via a well-organized and well-managed grass-roots computer-savy campaign, the likes of which are hitherto unseen. Also, there were a LOT of people (many were in Washington this weekend) who really agreed with Obama's idealistic government vision, a vision that has been torn-apart and smeared until it has become unrecognizable. He's still the pres. Time for the Republicans to come up with some ideas for a change.

Anyway, Obama has been "herding cats" long enough. It's all on the Republican's shoulders now. Obama can party and relax.
I say Obama supporters can hold their heads high. He did his best to do what he said he would do. I don't feel as though he let me down one bit.
Let's see if the Republicans will be able to say that about their heroes in two years.

Pablo goes to Washington for The Rally to Restore Sanity and/or Fear...

3:16 PM |
I feel badly that I haven't added to this blog lately. But, I really didn't know what direction I was going myself yet, so it was hard to know which direction to take on the blog.


I had envisioned that I would be running a business selling laptops by now, and that I would have to hence abandon any political dialog (which can get upsetting for me, admittedly).


Now, my business plans have taken a turn that will allow me to postpone the challenge of running a consumer-based, hence apolitical, business for awhile. So, especially since many of my most-oft quiet buddies have become vocal before this very crucial election, it is time to write.


Something is in the air in this country. Something so strong, that my buddy Tom in Tucson was recently driven to comment:


"I salute the insurgent forces that have transformed modern democracy into a contest of who can raise more money from secret donors to elect lapdogs to serve the narrow interests of their wealthy donors, all the while appealing to the gullibility of the jug-headed hillbilly masses mindlessly dancing with glee as they obediantly vote against their own economic self-interest."


Whatever the outcome of this election, it will be surprising.


It seems it was a perfect time to visit my brother Ed in DC, and attend a 3-hour "Rally to Restore Sanity and/or fear.  I've just settled from my long flight back home, and have decided that since there was some interest, and because there were many people who couldn't go but wished to, I should write down my thoughts on this extraordinary experience.


I still haven't been able to find a solid report on how many people there actually were at this rally. It almost seems like the media is afraid to report such a huge number of thoughtful, rational people at a national gathering. Though the media seems to love to inflate the numbers of pissed-off Americans foaming at the mouth about taxes on those much wealthier than themselves (as if they are living wealthy lives vicariously somehow) and the plight of the poor, abused health insurance companies who have recently lost some of their power in deciding whether the poor can access decent healthcare (or even any healthcare at all) or when and why they can jack up your bill or deny you.


I've never been to an event on the National Mall before, but I can tell you that I have been to many concerts where people were shoulder-to-shoulder. It was like this, but in a very big area. Our National Mall, surrounded by museums which quietly document our national democratic experiment, is a huge area.  This was a packed, huge area.


My brother and I, arriving fashionably 30-minutes late or so, came to the entrance of our national treasure-trove to immediately realize that we were: 1) never going to be able to see the stage, and 2) we might not even be able to see one of the jumbo-trons without some diligent effort and 3) To be able to get close enough to hear this event, with a full concert-sized PA system, was even going to be a challenge. We decided that a reasonable goal was to get to where we could hear and maybe partially view one of the three huge jumbo-trons.


The minute we entered the mall from the street outlining it (the Washington monument is on the other side of that street) you could tell that this was an event with a very different vibe. These are, after all, the people who understand, and even relish the satire of Stewart and Colbert. These are my people. These folks, like myself, must have used the satire and humor of Stewart and Colbert as therapy during the Bush era.  I know my conservative buds will roll their eyes, but those years messed with my head. I honestly think I might have had to seek some kind of anti-depression medication without my Daily Show to laugh and cry with.


Of course, I wondered if there were going to be any tea-partiers or wingnuts arguing with the rally attendees against "Socialism" and "Big Government" there, but each time I thought I saw some, it just turned out to be more satire. It was disorienting. Here were my brother and I, walking into a more and more dense mass of humans, but humans with senses of humor and satire, and most-likely sincere wishes by now for a much-overdue healing of our collective American souls. These people were carrying signs with humor so deep and clever, it more often than not took a moment to figure out the punch line of a sign. 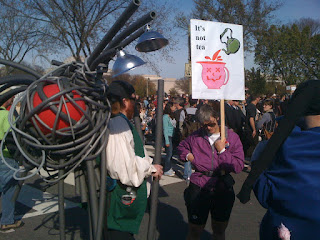 I'd get momentarily argumentative when I thought I saw a sign that was a killjoy hateful slur toward Obama, but it was always something deeply clever, a concept that was deep, and "tight enough to weed out all the weenies" as a spelunker bud of mine had once remarked about a spot you had to push through to enjoy a profoundly beautiful cave that didn't have a tour walking through it. Here was a sign saying "FDR lied" - Tea Partier?? NO! This person was part of "Team Colbert," satirically making a statement that FDR lied that we only reflexively fear fear itself. 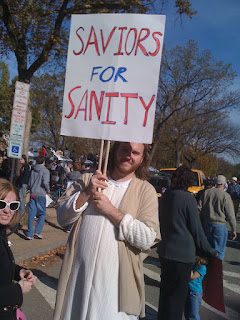 Next, here comes a line of suit-wearing, college-going (probably business-majoring) young punks with suits and ties. "Here it comes," I think, "the argueing will begin: "Obama is a Socialist!" they'll shout and "Get a job, Tree-hugging-Hippys!"


No! These "Lawyers in Love" are moving in synched-motion and robotically reciting epitaphs like: "Corporations are People Too!" and "Keep your filthy government hands out of our wealth-entitled opulence!" and "Don't worry! The Corporations and the Free Market love you and will take care of you! Haven't they up till now??"


Meanwhile, we are impossibly pushing deeper and deeper into a huge space with dwindling room for movement.  There are a couple of thin areas for egress on the perimeter of the throng deepening and deepening with people. I look to our left, and there are lines of police standing with riot gear in formation to the side. "Is it actually possible that such a tightly-woven mass of people can gather without violence?" I think nervously.


Finally after some time we are getting close enough to hear, and perhaps able to see one jumbo tron that seems miles away. My brother thinks we should try to move up against one of the chains that surround the grassed area so we can at least not be in a place where people are moving constantly, trying to get closer.


We end up close to a porta-potty egress area, and I end up playing a couple of roles:


1)  Helping sweet older folks over the chain to get to the porta-pottys. and
2) conspiring with people about what is going on, since there are so many people ahead that anyone's view of the nearest jumbo-tron is intermittent.


Here's how #2 went: "Who's that speaking, is that Father Guido Sarduci?"
(Young Person): "Father who?"
"Is that Cat Stevens??"
"Yes, that's definately him!"
"Ozzy??" "Wow, his voice is rough!"
"Oh I get it! Colbert wants Ozzy's "Crazy Train" to be the theme, Stewart wants  "Peace train," but they compromised on the Ojays "Love Train"
"Stewart is singing??? I thought Ozzy's voice sounded rough...sheesh!"
"Ahhh, it's that flight attendant that went nuts and quit his job by sliding down the airplane escape slide! I LOVE THAT GUY!"


I look around, and see that some people just can't stand not being able to actually see the stage. They have taken to the trees, climbed impossible poles and even have resorted to sitting atop the porta-pottys (even cute young girls were doing this). I admired them all. 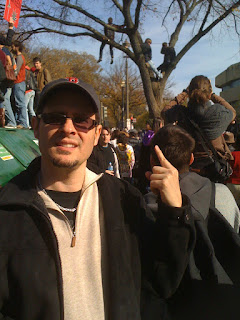 I also admired the people who got there early, no doubt, but chose to sit on one of the great steps in front of our many Smithsonian museums and public archive buildings that surround the National Mall. The steps put them high above the crowd, and probably had an "amphitheater-like" effect for the sound. That would have been my choice of seat.


I've never had the privilege to be with so many smart, insanely funny and hopeful people. As my buddy Tom's dad used to say "There's always a dick in the poker game." Well, not this one; not really. And this was a very big poker game. 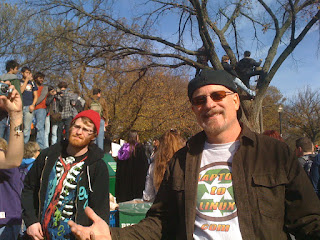 If opening the floodgates of corporate bribe money  takes our government away from us this election, I'll always have that experience. Although it was my first ever chance to "see" Jon Stewart and Steven Colbert, it was mostly an experience that was overwhelmed by a chance to see the wisdom of people who use rational thought and actual dialog to decide how they feel about things. When so many people like that can gather in one place at the drop of a satirical hat, it gives me  hope we can heal ourselves from the national damage of the Bush years someday.
Newer Posts Older Posts Home
Subscribe to: Posts (Atom)